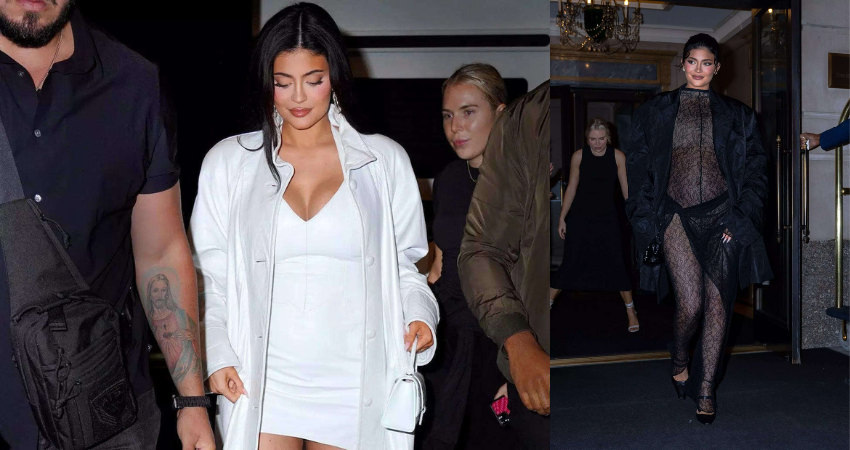 The 24-year-old Kylie Jenner is a bold and daring actress. We have always seen her in bold and stylish dresses. Now she is pregnant and her maternity fashion is no different.

Kylie Jenner has recently announced her pregnancy via a short clip posted to Instagram on Tuesday and after that announcement, she was seen in 5 daring maternity dresses.

First, she wore a white minidress and later she rocked in a see-through catsuit made with black lace. Along with these dresses, she has also been wearing high heels and expensive handbags with her bold outfits.

Kylie Jenner has shared photos with her 3-year-old daughter from a restaurant in New York City. In these photos, she wore a tan fuzzy bucket hat, brown-and-white cow-print boots, and a brown leather coat worn as a dress with a belt around her waist. The whole combination was highlighting her baby bump.

On Friday she has also rocked in a gray sweatsuit with a crop top that showed her stomach.

Jenner was also seen in a $425 pair of black Porterhouse jeans, a split-design T-shirt with fabric tied around her waist, a $5,250 cross necklace from Ruby Stella, and a $17,500 Louis Vuitton handbag.

And on Thursday again she went out in a black lace catsuit and skirt. This dress was made for her by designer LaQuan Smith. In this dress, she was covered her chest and square-toed heels and her baby bump was clearly visible.

After that, she was also seen in a halter-top Marcela look with a shiny coat.

Read Also: Top 5 Most Beautiful Hollywood Actresses Of All Time